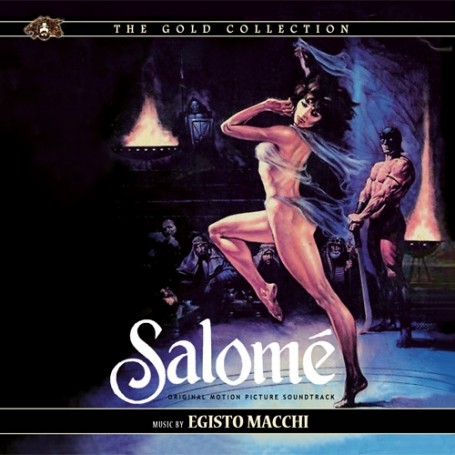 Kronos Records is proud to release for the first time ever in CD format the soundtrack for SALOMÉ  the 1986 Italian-French drama film directed by Claude d'Anna and starring Jo Champa, Fabrizio Bentivoglio, Pamela Salem, Fabio Carfora and Tomas Milian.

While Jesus is preaching with his Apostles, the confessor John the Baptist is arrested by the king of Judea to the many defamatory sermons against the power of the monarchy. Herod, son of Herod the Great, imprisons John, and Princess Salome, daughter of Herod, without him being aware of it, secretly falls in love with John the Baptist. But it is a corrupt and lustful love, which comes from lying insults that John turns to the corrupt family of Herod. When Herod, in the birthday of his daughter, asks to Salome what gift she wants, Salome says she wants to see the severed head of John. Herod the content, and so Salome, when John is beheaded, performs the dance of the seven veils, and falls into sexual rapture, kissing full of the passion the mouth of the head. Herod, horrified, puts to death his daughter.

The music was composed and conducted by the great Italian composer Egisto Macchi who wrote a very diverse score, ranging from orchestral dramatic and avantegardistic pieces, to syntheseizer ones verging on the ambient.  Prepare to be taken away to the unique musical world of this truly unique composer.

An LP containing a selection of cues from the score was released back in 1986, now on our limited edition 2CD set is the music as presented on the 1986 CAM LP and all the music that was previous unreleased. Over 2 hours of music in our 25th GOLD title and globally our 100th release.