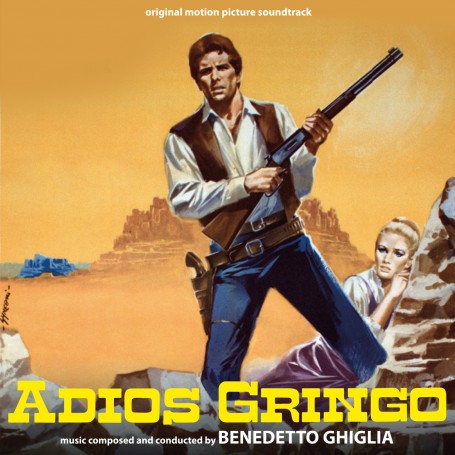 We are pleased to release the complete edition OST by Benedetto Ghiglia from the Spaghetti Western "Adios Gringo."

SOUNDTRACK
Benedetto Ghiglia composed an OST where instruments such as strings are not present, creating a sound almost like the espionage style in "The Ipcress File" by John Barry. The sound is created by a recurring use of the Hungarian cimbalon performed by Leonida Torrebruno (the same soloist used by Ennio Morricone some time after for "Bluebeard"). This soundtrack is something unique in Italian Western films thanks to the electric guitars which allude to the pop music popular at the time, as well as The Cantori Moderni (Modern Singers) chorus of Alessandroni, and the often dark sounds present. Another exceptional solo artist is Franco De Gemini who created a true orchestra of harmonics with different overlaps. There is also no lack of saloon and folk music. C.A.M. originally released an album (CAM CDR. 33.15) with sixteen selections in mono (total time 32:15 minutes). The song "Gringo" performed by Fred Bongusto came out instead on an EP Fonit Cetra (SPF 31180). Thanks to the mono master tapes of the original recording session, we were able to discover all of the unreleased material that brings our CD to a total of 64:49 minutes. We have also included two rare stereo mixes, including the song performed by Fred Bongusto.

PLOT
While Brent Lenders is chasing down Gill Clawson (who swindled him), he happens upon Lucy, a girl who has been raped and tied up in a solitary, inhospitable place. He rescues her but once they arrive in Sage Crossing to Dr. Barrfield's, the local people and sheriff Ox are suspicious of him because he is wanted. Meanwhile, while Lucy is recovering, several facts make Ox suspect the presence of a few criminals in the vicinity of the village. Sure enough the stage coach which Lucy had been traveling in is attacked by Gill Clawson, Moffit, a notorious gunslinger and Avery Ranchester, the unsuspecting son of the largest landowner in the area. Brent, who is afraid he won't be able to resolve the situation, takes Lucy away with him, but is followed by Gill, who he kills in a duel. Then all the village men led by a furious Mr. Ranchester follow him. A furious clash eliminate some of the culprits and offers the opportunity to expose all the others just as the doctor, the sheriff and the county judge show up. Brent and Lucy continue their journey to Johnson City where he intends to clarify his stance to the judge.