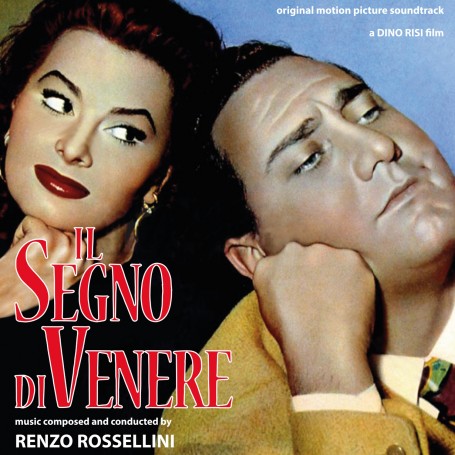 Renzo Rossellini (Rome, 2 February 1908 - Monte Carlo May 13, 1982) wrote music under his brother’s direction (director Roberto Rossellini) for important films of Neorealism such as "Rome, Open City", "The Children are Watching Us,"  and "Paisa "(for which he won the Silver Ribbon). But he should also be remembered for his symphonic score to the 1965 cult movie "The Lady of the Lake" (aka “The Possessed”) by Luigi Bazzoni.

With the publication of the complete OST for the 1955 comedy "The Sign of Venus", we continue our series dedicated to the Golden Age of Italian comedy (already out on CD is music by George Fabor, Piero Piccioni, and Armando Trovajoli for the trilogy by Risi "Poor But Beautiful" (U.S. title “Poor but Handsome), "Pretty but Poor", and "Poor Millionaires."

Incredibly, after sixty years, the mono master tapes of the original recording session have survived in excellent condition. We’ve used every note recorded to assemble the entire OST (37:14 minutes). The main score is cheerful, but also vaguely contemporary in orchestration. The music reflects a Roman setting and the relationships between the characters involving love, jealousy and loneliness. The master tapes also contained two danceable mixes by Felice Montagnini. To the delight of fans we have included a rare suite lasting 7:03 minutes with extracts from the 1955 recording session with the sound of people talking in the studio, one of whom is Maestro Rossellini.

Cesira and Agnese are cousins who live in Agnese’s father’s house. Agnese is a beautiful girl, while Cesira, a sentimental dreamer, is quite homely. When they are together, all eyes fall on Agnes and her cousin remains in the shadows . Nevertheless Cesira has not given up hope in finding the man of her dreams because a fortune teller has predicted that she is under the "Sign of Venus." So she attempts to get to know her male acquaintances better. She eventually has the chance to get close to Romulus, a boy who lives by his wits, and Alessio, a mature self-styled poet who wins her over with his aloof and superior manner.