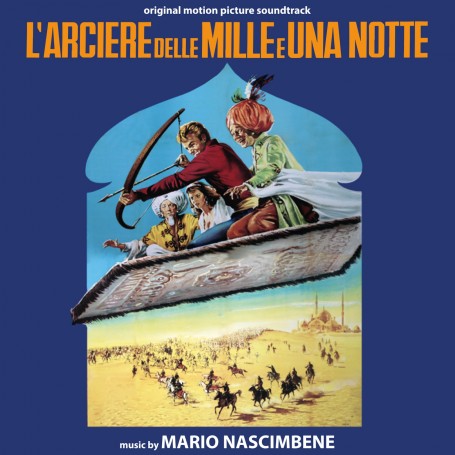 THE GOLDEN ARROW
Mario Nascimbene (born in Milan November 28, 1913 – died in Rome, January 6, 2002) was one of the biggest names in international film music and was the first Italian to enter through the golden gates of Hollywood. He set the music to films such as "Farewell to Arms," “Alexander the Great," "The Barefoot Contessa" and "The Vikings." His name is linked to directors including Zurlini, Rossi and Lizzani. For this fantasy film, Mario Nascimbene wrote a brief symphonic OST, dominated by an epic main theme for the young protagonist Hassan. The whole story is highlighted by magical and adventurous themes with an orchestra and a choir. In the background music the author intervenes with electronic effects that create the atmosphere of Arabian Nights .

Plot:
Prince Baktiar is the undisputed tyrant of Damascus. The king knows that he must give up his power the day when the legitimate heir to the throne, Jamila, finds a husband worthy of her. In a race among the most powerful men of the region, a mysterious contender named Hassan wins and Jamila immediately falls in love with him. Baktiar tries to prevent their marriage through a series of schemes, but all kinds of good and bad magical forces intervene.

In the end it turns out that Hassan is the son of King Hakim, who was killed by Baktiar. Hassan passes all of the tests he is given and defeats his evil opponents . Winning back the kingdom also marks the crowning moment of the dream of love between the young prince and princess .

THE FIGHT FOR SURVIVAL
Mario Nascimbene composed background music based on the main theme of "The fight for survival." The series contained pieces of repertoire, segments of Mixerama, an instrument invented by the composer in his study La Meridiana in Rome, as well as original music that unfortunately was not possible to locate. On the stereo master tapes of the recording sessions, we are honored to have found four surviving tracks of great artistic value. There were four versions of "The fight for survival " including the version from the opening credits, one in slow tempo, one in shake interpreted by the beautiful voice of Shirley Bassey and accompanied by the Folkstudio singers choir, and an instrumental version. For fans of Shirley Bassey and James Bond it is undoubtedly a great recovery.

Plot:
A series of twelve episodes broadcast on TV between 1970 and 1971. The series analyses the condition of humans on Earth throughout different historical periods, each episode with a different theme. The common thread is the suffering of mankind and his eternal struggle for survival. It startsfrom the dawn of mankind in prehistoric times to present day, and even to the future of Western civilization.