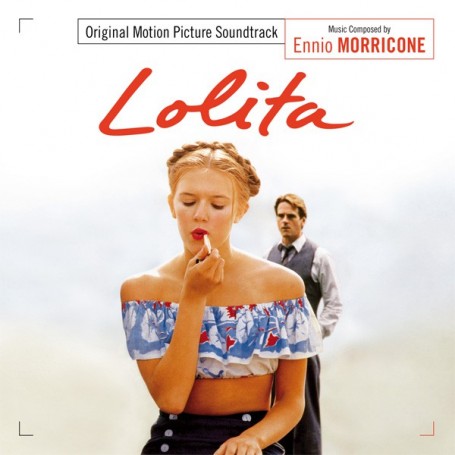 Music Box Records is pleased to reissue the expanded CD of Lolita (1997), Ennio Morricone’s classic score for Adrian Lyne’s controversial adaptation of the Vladmir Nabokov novel. Starring Jeremy Irons, Melanie Griffith, Frank Langella and Dominique Swain, this version had to contend with the shadow of the earlier adaptation made by Stanley Kubrick.
In 2013, Music Box Records released this expanded edition which was quickly sold out in less than two months.

Nabokov’s novel tells the tale of Humbert Humbert, a university professor who falls in love with the daughter of his landlady. His love for the teen-aged nymphette Lolita knows no boundaries so he marries his shrewish mother in order to be close to the girl. Before his new wife could oust him as a pervert, Humbert gets widowed and must take of Lolita – a sweet burden he happily carries across the country. Their cross-country adventure is followed by the mysterious Clare Quilty who has his own plans for Lolita...

Mastered by Claudio Fuiano and Daniel Winkler, this new reissue by Music Box Records with a brand new artwork expands upon the original Milan Records soundtracks by omitting the period songs and adding more music by the Maestro. Highlights include different variations of the main theme and the "Requiescant" theme which features the guest performance of the Coro di Voci Bianche dell'Arcum children's choir.