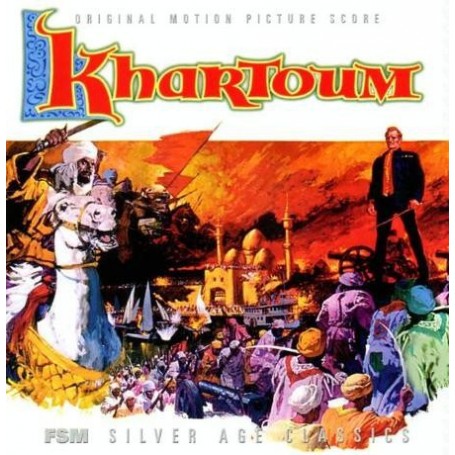 Khartoum is a widescreen historical epic starring Charlton Heston as British General Charles "Chinese" Gordon, who in 1885 defended the city of Sudanese city of Khartoum against an uprising led by the Islamic militant, the "Mahdi" (Laurence Olivier). The film is well-regarded for Heston's performance as well as those of its British stars: Olivier, Ralph Richardson (as Prime Minister Gladstone) and Richard Johnson (as Gordon's second-in-command).

Gordon's story has passed into folklore in England and Cordell aided the film's romanticized approach with a patriotic British fanfare, plus a long-lined theme for Gordon focusing on the pride and dignity of the commander. On the flipside, Cordell painted the Mahdi and his followers with sharp strokes of Egyptian exotica. Fans of John Williams (an admitted Anglophile composer) will find many similarities in Cordell's writing and orchestrations, especially the Arabic-flavored music which parallels Williams's work in the Indiana Jones films.

Mosquito Squadron is a WWII adventure starring David McCallum (The Man From U.N.C.L.E.) as a fighter pilot whose leader is downed behind enemy lines. McCallum starts a tentative romance with the man's wife, then learns that his friend might be alive after all. Cordell provides aggressive, rhythmic scoring for the film's aerial missions and German assaults, a noble British melody for the RAF pilots, and evocative, romantic scoring for the love story.

The CD is entirely in stereo. Khartoum features Cordell's re-recorded LP tracks (faithful to the film orchestrations; the original soundtrack recording is lost) with a bonus track of exit music from the film itself. Mosquito Squadron is from an LP assembly that was prepared by United Artists Records but never released—until now.