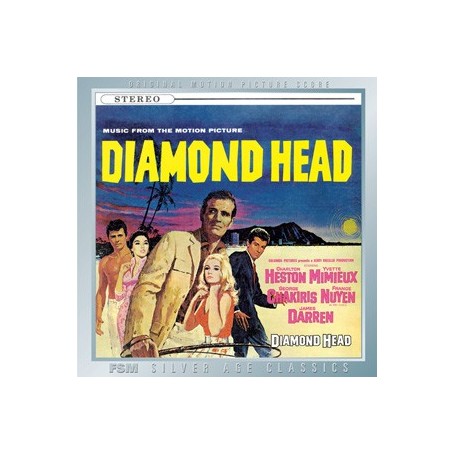 DIAMOND HEAD / GONE WITH THE WAVE

Diamond Head/Gone With the Wave is a Colpix Records "two-fer" of soundtrack albums from the early careers of John Williams and Lalo Schifrin, respectively.

Scoring Diamond Head was a young pianist, jazz arranger and television composer just beginning his feature film career: "Johnny" Williams, now known worldwide as John. Diamond Head was one of his few dramas of the 1960s (he otherwise tended to score comedies) and his earliest feature film soundtrack album released.

Like many LPs of the era, the Diamond Head album was a re-recording featuring major score cues, source music, and cover versions of the main title theme (composed by bandleader Hugo Winterhalter, and sung in a vocal version on the record by costar James Darren). Williams adapted Winterhalter's melody for several cues in the underscore, otherwise writing all-new material for supporting characters and situations. Several source cues are more akin to Williams's television work of the time, while dramatic selections anticipate his symphonic glory of years ahead.

While the film itself was barely distributed, the soundtrack album on Colpix Records received rave reviews, eventually becoming a collector's item for both the jazz and surfing crowds. The album makes its CD debut here, a vintage array of Schifrin grooves from the glorious mid-1960s.

Due to missing masters in the Colpix tape library, Diamond Head has been mastered from a stereo copy of the LP. Gone With the Wave was mastered from a stereo 1/4" master tape; however (full disclosure), it may have itself been made from an LP in the late 1960s. Fortunately, Colpix Records was legendary for the superb quality of its vinyl pressings, and the sound quality of this CD is first-rate.

Liner notes are by Jeff Bond and Jeff Eldridge for Diamond Head; and Jon Burlingame for Gone With the Wave, featuring new interview material with Lalo Schifrin and Phil Wilson.

Gone With the Wave