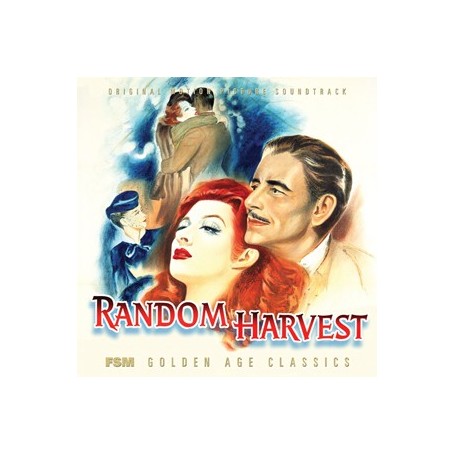 FSM presents a doubleheader from one of the most distinguished Golden Age composers who is, almost unbelievably, scarcely represented on CD: Herbert Stothart (1885-1949). Although his underscore for The Wizard of Oz (1939) is world-famous, virtually none of Stothart's numerous other works for M-G-M are available in any form. This CD is a step in the right direction with the surviving tracks for two important films.

Random Harvest (1942) was an acclaimed love story based on a novel by James Hilton, starring Ronald Colman and Greer Garson. Set in the aftermath of World War I, the film concerns the struggle of Colman to regain his memory, and the incredible perseverance of Garson to help him do so. Stothart's score interpolates the English wedding hymn "O Perfect Love" amongst yearning and beautiful melodies of his own.

The Yearling (1946) tells the story of a boy and his pet deer in 1880s Florida—a loving coming-of-age tale with first-rate performances by Gregory Peck, Jane Wyman and Claude Jarman Jr. Stothart—who often interpolated source material by other composers—based his score around a concert work by British composer Frederick Delius, Appalachia: Variations on an Old Slave Song, inspired by Delius's stay in Florida. The combination of Delius's sensitive rendition of Americana and Stothart's gifts for evoking natural locales resulted in a gorgeous score brimming with sympathy and melancholy.

Unfortunately, the recordings of both Random Harvest and The Yearling suffered deterioration over the years, and each is about one-half complete. The sound quality is largely "archival," particularly for The Yearling, which was long ago transferred from its original optical film to 1/4" tape; Random Harvest was mastered from the original optical film for superior results. For both scores, what survives is exquisite, and several cues are in glorious stereo (including the main titles), owing to the use of different microphone angles.

Herbert Stothart was one of the titans of film scoring in the 1930s and '40s, who had an aptitude for subtlety and atmosphere that looked ahead to the future, even as his orchestral colors came to represent the romantic sound of Golden Age Hollywood. This CD is a long overdue first release of two important scores, and a nostalgic treasure trove for fans of the period.

Liner notes to this CD are by Stothart authority Marilee Bradford.