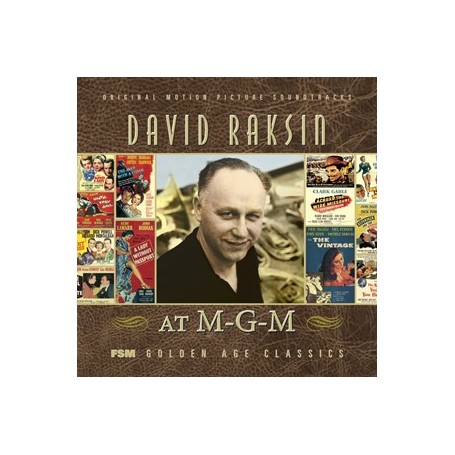 David Raksin (1912–2004) was one of the greatest composers of Hollywood’s Golden Age, and at long last there is a comprehensive collection of his work.

This lavish 5CD set is devoted to Raksin’s time at M-G-M from 1950–1952 and again in 1957. Eight complete scores are presented along with excerpts from five more—13 total. The discs are arranged loosely by genre:

Golden Age collectors may be familiar with Raksin’s style from his classic scores such as Laura, The Bad and the Beautiful and Forever Amber. However, given the paucity of his CD releases, it is understandable if many fans are not. Raksin was a highly advanced and modern composer with a gift for making complicated and dense orchestrations sound direct and accessible to the ear. Although highly intellectual, he was devoted to melody and the baker’s dozen of scores on this collection shine with beautiful tunes, from the romantic strains of The Vintage to the moody and captivating Man With a Cloak.

The documentation for this project is so extensive that it could not be contained in the CD booklet or online notes alone. The CD booklet contains an essay by Raksin’s friend and scholar Marilee Bradford (with information from his personal papers) and producer’s note by Lukas Kendall; while the FSM website houses—for free—complete liner notes for each film with track-by-track commentary.

This collection is almost entirely in monaural sound; extensive restoration work has been done to the magnetic film, optical film and acetate sources for a smooth listening experience. The 5CD set is packaged in what would normally be a 3CD “butterfly” or “clamshell” jewel box with the additional discs stored on hinged trays. The 36-page booklet is illustrated not only with copious movie posters and stills but rare Raksin photographs for a “scrapbook” type of presentation.

For a composer who gave the best and demanded the best, we have hopefully given the best. This 5CD, six-hour presentation is limited to 1,500 copies.

Orchestra Conducted by David Raksin, except where noted

Song: “Until They Sail” Performed by Eydie Gormé