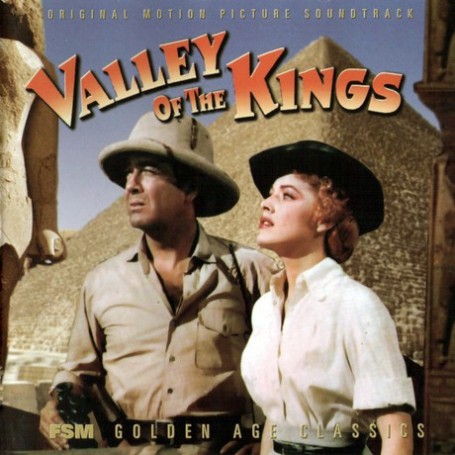 VALLEY OF THE KINGS / MEN OF THE FIGHTING LADY

Valley of the Kings (1954) was an Egyptian adventure starring Robert Taylor as an American archeologist in what would eventually become the "Indiana Jones" mold. Taylor and co-star Eleanor Parker defeat Arabian thugs and two-faced Europeans amidst much of the trappings of the Indiana Jones films: desert treks, street chases, ancient ruins and cliffhanging action.

Scoring the film was M-G-M's reliable Miklós Rózsa, who effortlessly tailored his Eastern European style to the Egyptian locale, with harmonic-minor twists both sinister and mysterious. Rózsa's score includes an enveloping love theme for the burgeoning romance between Taylor and Parker, a lighthearted chase scherzo, and grand statements for the titular valley itself.

This CD features Rózsa's complete underscore to Valley of the Kings, plus bonus tracks of the film's source music (the cues which Rózsa himself supervised). As a special bonus, FSM has gone treasure hunting and excavated Rózsa's music to another film of African riches: King Solomon's Mines (1950) starring Stewart Granger. Although King Solomon's Mines itself features only native percussion and source music, Rózsa composed and recorded a traditional piece of exciting underscore for the film's trailer; that has been unearthed and included here, although the piece is incomplete.

Continuing the parade of Rózsa rarities, this CD also includes the soundtrack to Men of the Fighting Lady (1954), a verite-style feature about bomber pilots during the Korean War. Besides main and end titles (interpolating "Wings of Glory," a patriotic song not by Rózsa), the film is virtually unscored—except for its finale, in which a blinded bomber pilot must make an emergency landing with only his wingman as a guide. This is scored by Rózsa with a special piece entitled "Blind Flight"; although written for the film, the length of the piece (19:47) allowed Rózsa to treat it more as a self-contained concert work, making it one of his more unusual film contributions.

The CD is entirely in stereo—remixed from the original 35mm masters—except for the trailer from King Solomon's Mines, which is in mono. Liner notes are by Jeff Bond and Lukas Kendall.