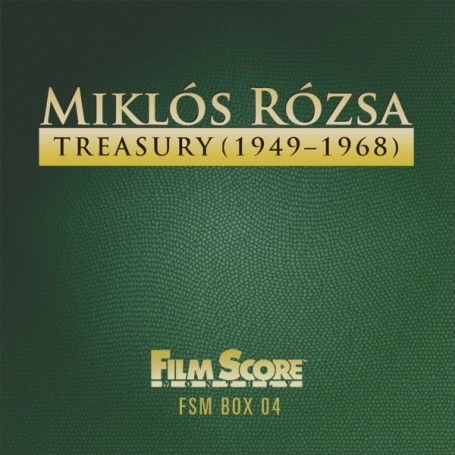 By buying this product you can collect up to 37 points. Your cart will total 37 points that can be converted into a voucher of 9,25 €.

FSM presents the Miklós Rózsa Treasury (1949-1968), a 15CD set celebrating one of the giants of film music. In this single package FSM makes available virtually every surviving, as-yet-unreleased note from the composer’s fertile and productive association with M-G-M.

At the core of the set are the first-ever complete releases of Madame Bovary and Quo Vadis (reconstructed with sound effects in some cues), two of the most sought-after titles in the composer’s filmography. Scores that have previously circulated in pirate editions—Young Bess, The Story of Three Loves and All the Brothers Were Valiant—are included with professional mastering and comprehensive bonus tracks. There are also complete (or near-complete) scores that have never appeared in any prior format, such as The Light Touch, Crisis, The Asphalt Jungle, Tip on a Dead Jockey, Something of Value and Crest of the Wave, plus surviving cues from The Red Danube, The Miniver Story and East Side, West Side. All this—and more: the U.K. recording of Knights of the Round Table is included for the first time complete (an abridged version was released by Varèse Sarabande), and Rózsa’s (uncredited) contribution to Beau Brummell is presented alongside the full original score by Richard Addinsell.

Extensive bonus tracks throughout the set shed light on both the filmmaking and composing processes, allowing fans to see how certain ideas were developed and changed over time.

The Treasury “closes the book” on previous FSM releases Knights of the Round Table and Lust for Life with additional bonus tracks; and also includes bonus tracks from King of Kings and Ivanhoe for which there was not room on their earlier Rhino editions.

This amazing set also makes available several score re-recordings conducted by Rózsa himself, including El Cid, The V.I.P.s and the first genuine stereo CD release of King of Kings. And for the first time ever on CD, listeners can hear the “greatest hits” album Rózsa recorded for MGM Records in 1963: Great Movie Themes Composed by Miklós Rózsa.

Crowning this magnificent achievement is the premiere release of the complete score to The Power—previously available only in abridged form, now with extensive bonus tracks and mastered for the first time from the (newly discovered) original 35mm scoring masters.

The three clamshell cases come in a deluxe box with a 48-page booklet containing a short essay and complete track listings. Online you will find free extensive notes in the finest FSM tradition by FSM regulars Lukas Kendall and Al Kaplan, plus Rózsa Society members Frank K. DeWald and John Fitzpatrick. There are also original LP notes and a few surprises.

This is a set to be loved and cherished by Rozsaphiles past, present and future. With only 2,000 being pressed, it is sure to become a collector’s item.