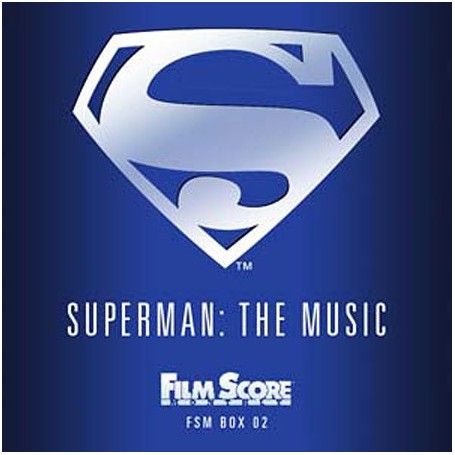 By buying this product you can collect up to 9 points. Your cart will total 9 points that can be converted into a voucher of 2,25 €.

The "Blue Box" is Superman: The Music (1978-1988), an 8CD set of the complete scores to the four Superman movies starring Christopher Reeve, with music by John Williams (for the original) adapted by his colleagues Ken Thorne and Alexander Courage for the sequels. Bonus discs include music by Ron Jones for a 1988 Superman animated series and source music for the features, all packaged in a deluxe hardcover slipcase with a 160-page illustrated hardcover book.

Superman: The Movie (1978) is a score that needs little introduction—it is one of John Williams's glorious "blockbuster" works from the late 1970s in which he nearly singlehandedly revived the symphonic film score. Rousing, tuneful and unforgettable, it is one of the lynchpins of any soundtrack collection. The film features a kind of tripartite structure, moving from Superman's origin on planet Krypton (given austere, almost Shakespearean colors) to his teenage years in Smallville (scored with beautiful Coplandesque melodies) and his debut in bustling Metropolis, where the film's action, romance and comedy come to the fore in some of Williams's greatest scoring ever. Like the film itself, Williams's music is a perfect combination of heart, humor, myth and drama.

Williams's music to Superman: The Movie has been released on several occasions, most recently on a 2CD set from Rhino (now out of print). That album, however, was reconstructed using secondary dubbing elements, as the six-track 35mm music masters were unearthed only afterwards. For this definitive presentation, the entire recording has been painstakingly remixed and remastered from that first-generation source, yielding the best sound quality ever. Discs 1 and 2 of this 8CD set present Williams's complete recordings to Superman: The Movie (additional alternates and source music are on disc 8)—including alternate versions never before heard, such as a powerful early version of the Kryptonian villains' banishment to the Phantom Zone.

John Williams was not available to score the Superman sequels, but in each case his music was adapted and re-recorded by one of his colleagues. For Superman II (1980) and Superman III (1983) that was British composer Ken Thorne, who had a long working relationship with director Richard Lester. For Superman II—in which Superman deepens his relationship with Lois Lane and fends off the Kryptonian super villains—Thorne stuck close to Williams's compositions, stretching and reworking them to fit the drama. The result was a score filled with interesting variations on Williams's cues that beautifully supported the new picture. Thorne's score was released on LP by Warner Bros. Records that surfaced on CD only in a long out-of-print Japanese edition (coupled with the Superman III album). This premiere release of the complete score (doubling the playing time) has been entirely remixed from the 35mm music scoring masters and is found on disc 3. (Source music from Superman II is relocated for space purposes to disc 8.)

Superman III found Superman traveling in a lighter direction, to accompany director Lester's sensibilities and that of costar Richard Pryor. Superman defeats a supercomputer financed by industrial tycoon Robert Vaughn and overcomes poisoning by fake kryptonite; his alter ego, Clark Kent, begins a romance with Smallville's Lana Lang (Annette O'Toole). Ken Thorne was given a freer hand with the music and composed a great deal of new material (such as a main title ballet for slapstick on the streets of Metropolis), returning to Williams's themes for key action and character moments more in the Superman mythology. A creative and intriguing work, only 20 minutes of his Superman III score were included on the film's 1983 LP (and aforementioned Japanese CD). Disc 4 features his complete Superman III soundtrack, with alternates and source music (including the five tracks on side two of the LP by composer/producer Giorgio Moroder) on disc 8.

The Holy Grail for Superman music aficionados has been the completely unreleased score to the fourth film, Superman IV: The Quest for Peace (1987), for which Williams's themes were adapted by his longtime friend and occasional collaborator, Alexander Courage. With Superman IV being an attempt—at least at first—to restore the quality of the franchise, it was decided that all major John Williams themes would be used (where appropriate) in the new score. What's more, Williams himself contributed three new melodies for Courage's use: "Someone Like You," a sultry, sexy melody (recalling the swinging sixties work of "Johnny" Williams) for Mariel Hemingway's character of a young newspaper executive; "Nuclear Man Theme," a driving action theme for the radioactive villain played by Mark Pillow, treated in versions alternately dramatic and comedic, and—sure to be a delightful surprise—"Jeremy's Theme," a lyrical theme for the young boy who appeals to Superman to rid the world of nuclear weapons.

In addition to being the composer of the original Star Trek theme, Alexander Courage was one of the greatest arrangers and orchestrators for Hollywood musicals. That training came to great use in Superman IV as he adapted Williams's melodies into a powerful symphonic work, with imaginative and nuanced renditions of the familiar themes. The film was cut by over a half hour prior to release, with much of Courage's work ending up on the cutting room floor as well. The two-disc presentation of Superman IV (on discs 5 and 6) showcases his score as it was meant to accompany the complete version of the picture—meaning many cues, some comprising entire sequences, have never been heard in any form. His complete score (recorded for scheduling purposes in both Germany and England) has been newly remixed from the original two-inch multitrack masters.

The second half of disc 6 features the music by the other composer whose work was abridged when Superman IV was cut for release: Paul Fishman, son of composer and music supervisor Jack Fishman and a recording artist with 1980s British techno-pop band Re-Flex. Fishman was hired to provide contemporary pop music primarily for a sequence at the Metro Club discotheque (where the "First Nuclear Man"—a deleted character—shows up to battle Superman). When the character and sequence was cut, it resulted in the deletion of most of Fishman's contributions to the movie (and the cancellation of a planned soundtrack album). The artist has personally remixed an eight-selection presentation of his Superman IV work here.

If you were the right age to watch Saturday morning cartoons in 1988, you might remember an above-average Superman animated series that aired on CBS, produced by Ruby-Spears Enterprises. Only 13 episodes were made, but the series was noteworthy for its "Superman's Family Album" vignettes of Superman's childhood in Smallville as well as the high quality of its animation—and music. Ron Jones (today of Family Guy, then of Duck Tales and Star Trek: The Next Generation) was hired to bring a symphonic feature-film touch to the show's soundtrack. He recorded a combination of original (to-picture) scoring and library music in the style of his powerful Star Trek music of the period—and the best tradition of Williams's blockbuster work like Star Wars and Superman, one of the inspirations for Jones's career. Ruby-Spears licensed Williams's Superman theme for use in the show's main title; the series' theme was otherwise a similar heroic march written by Jones. Jones's score to the 1988 Superman, some of the best music created for 1980s children's animation, comprises disc 7 of the box set, rounding out a full decade of music for the iconic character.

As indicated above, disc 8 of the set collects alternates and source music for Superman: The Movie, Superman II and Superman III that which would not fit on discs 1-4, respectively. This includes previously unreleased radio source music by John Williams heard only in the extended television broadcast as well as cues written by Ken Thorne for similar purposes in the sequels. The eight discs are packaged in two "clamshell" or "butterfly" cases—four discs to each case—and the two cases placed along with a 160-page hardcover book in an equally durable blue slipcase (with silver "S" insignia). The 160-page book sets a new bar for a soundtrack presentation. The table of contents is:

4 Introduction: Music That Becomes an Icon

6 Overview: A History of Heroic Music

8 Superman: The Movie: This Is No Fantasy

55 Interview: In Williams's Own Words

58 Musical Analysis: The Making of the "March"

60 Superman II: A Return to Glory

84 Superman III: Laughter in the Air

Superman: The Music (1978-1988) is produced by Mike Matessino and Lukas Kendall, with art direction by FSM's regular designer, Joe Sikoryak. Our gracious thanks to Warner Bros. Records and Warner Bros. Entertainment who have licensed these historic recordings as well as the photographs and artwork contained in the packaging; the creators for their time and recollections; and the composers and recording artists for their gifts and inspiration, particularly John Williams.