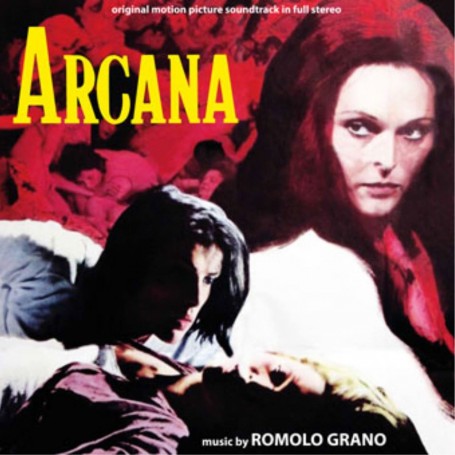 Digitmovies releases for the absolute first time on CD two extremely rare OSTs by Romolo Grano from the film Arcana and the TV show L’uomo Del Tesoro Di Priamo. For this film, Romolo Grano composed an OST where the main score emerges as a sort of concerto in three movements performed by an orchestra (with an emphasis on winds), the voice of Edda Dell’Orso, and pieces played by a Hammond organ. The score develops into an impending classic theme with the modern sound of drums. Psychedelic and macabre atmospheres alternate with a colorful Taranta (folk music) to accompany the mostmemorable scenes in the film. This OST was arranged and conducted by Berto Pisano.

The OST  of the TV serial L’uomo Del Tesoro Di Priamo transports the listener into the world of the archeologist Schliemann. The main score begins with a modern, danceable Greek flavor and is alternated with a charming archaic and Middle Eastern atmosphere with cord instruments, flutes and percussion, as well as sirtaki and bouzouki songs, a nineteenth century waltz and symphonic music. This OST was arranged and conducted by Gianni Oddi. For our CD we were able to use the master tapes in full stereo which had been previously recorded for the promotional albums released under the label Pegaso (listed as PEGASO PG7 e PEGASO PG14).

Plot: The film tells the story of a group of Southern Italians in Milan. Mrs. Tarantino, a widow, lives with her son in a working class neighborhood in Milan. In order to support herself, she dedicates herself to the practice of spiritualism and starts to receive some clients. Her son is convinced that hismother knows the authentic secrets of magic and not just tricks, so he forces her to disclose them and then he proceeds to use the magic on people. One of his victims is Marisa, a girl about to get married. She falls into a state of hysteria and then he rapes her. He also spreads panic in the neighborhood, provoking all kinds of accidents. Marisa reveals to Mrs. Tarantino that she is pregnant and is willing to get an abortion, but she dies during the operation and Mrs.
Tarantino’s son runs away. The film contains surreal images, such as frogs coming out of Mrs. Tarantino’s
mouth.

Plot: Heinrich Schliemann (born 6 January 1822 in Neubukow, died 26 December 1890 in Naples) was a German entrepreneur and archeologist. He became one of the most important figures in archeology for his discoveries during the nineteenth century. After years of research and study, he reached stardom with his discovery of the legendary city of Troy and the so-called treasure of Priam.