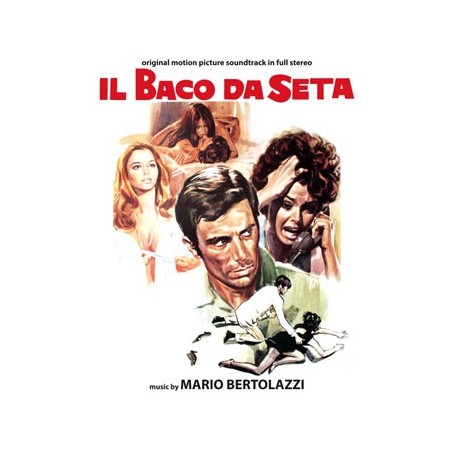 We pleased to release the complete edition CD of the OST by Mario
Bertolazzi for the film “The Silkworm” (“Il baco da seta”).

Mario Bertolazzi (born 10 October 1918 in Bologna, died 8 October 1986 in
Rome) was a jazz musician who starred in TV programs from the 1950s. He
also wrote numerous songs between 1952 and 1971 and was active in the
cinema as a soundtrack composer for films such as “Lady Dynamite”, (“La
padrina”), “Who Killed the Prosecutor and Why?” (“Terza ipotesi su un caso di
perfetta strategia criminale”), and “The Real Decameron” (“Decameron’300”).
For “The Silkworm,” Bertolazzi composed a main score in music-hall style for
Smeralda, the failed singer in the film, which is repeated with instrumental
variations and also a vocal French version. The leitmotif is alternated with
high-tension music typical of giallo films, electronic atmospheres, lounge
songs you might hear at a cocktail party, and a danceable shake that seems
to tastefully wink at famous American colleagues like Quincy Jones, Lalo
Schifrin and Henry Mancini. This excellent OST has been released in its
complete version on CD for the first time ever, using the master tapes in full
stereo from the original recording session.
This is the perfect CD to remember a truly well-rounded musician.

Plot:
Smeralda Amadier is a former French singer who lives in Italy in
Castiglioncello. She has serious economic problems and is not able to pay her creditors, who threaten to accuse her of fraudulent bankruptcy. One morning
she discovers her jewels, which were her last hope to pay her debts, were
stolen out of the safe where she was keeping them. Police commissioner
Guarneri arrives at the scene and scrupulously starts his investigation. Among
the suspects are Smeralda’s sister Ivonne, Smeralda’s lawyer and
administrator Planger, the secretary Marcelle, former lover and leech Didier,
and in particular Kostas, a young student from Greece who has a habit of
making beautiful women take care of him and who had been at Smeralda’s
house the night before. In reality, the Greek student was just a pawn in
Smeralda’s plan to get the money from the insurance. So when Kostas comes
back to get his part of the money, Smeralda kills him and convinces an
obliging Guarneri that she had to do it in self-defense.