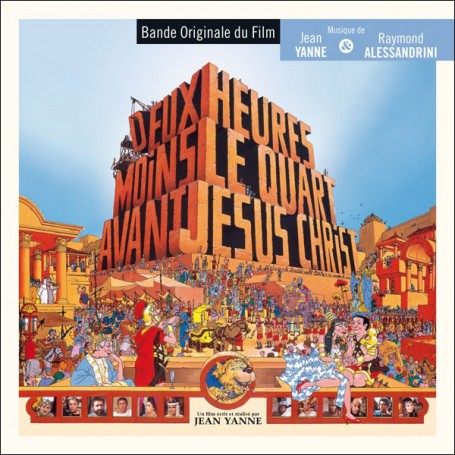 1959 : Miklós Rózsa’s iconic score for William Wyler’s 1959 epic, Ben-Hur will be the reference for biblical epic music at the same extent as Bernard Herrmann's discordant strings for thriller.

1982 : It was time for a parody tribute thanks to Raymond Alessandrini. The music for Deux heures moins le quart avant Jésus-Christ - just like all other aspects of the film - is characterized above all by numerous anachronisms, not lacking a certain impish playfulness, but always undertaken with extreme care. But the most subtle anachronisms of Jean Yanne’s film’s soundtrack are doubtless most evident in the numerous pastiches of scores composed by Miklós Rózsa for the great historical epics of Hollywood’s Golden Age.

Former collaborator with Michel Magne (composer for Yanne’s first films), but also studio pianist for Georges Delerue, Lalo Schifrin, Elmer Bernstein, and Alfred Newman, Raymond Alessandrini is above all a composer for the screen. He wrote delightful melodies and themes with grandeur and seriousness for this comic historical epic.

Oscillating without cease between homage (brilliantly executed by the musicians employed in the same period by John Williams for George Lucas’ Star Wars trilogy) and humour, these outstanding tracks allude to a music that is itself anachronistic: the explicit allusions to the pop culture of the 1970s and 1980s, to Serge Gainsbourg in his reggae period (Jouez transistors, résonnez cassettes) and to the electronic music composer Giorgio Moroder (Homosexualis discothecus), a pastiche of a baroque piece, Marc-Antoine Charpentier’s Te Deum (Le J.T. avant J.C.) referring to the theme music to the Eurovision.

From the original master tapes, Music Box Records presents for the first time available on CD the complete score of Deux heures moins le quart avant Jésus-Christ including the entire RCA LP selection plus several previously unreleased cues, some of which are not even heard anywhere in the film. This definitive edition is presented in full stereo and includes all the music written and recorded by Jean Yanne and Raymond Alessandrini for the film, with a total of 59 minutes of music.