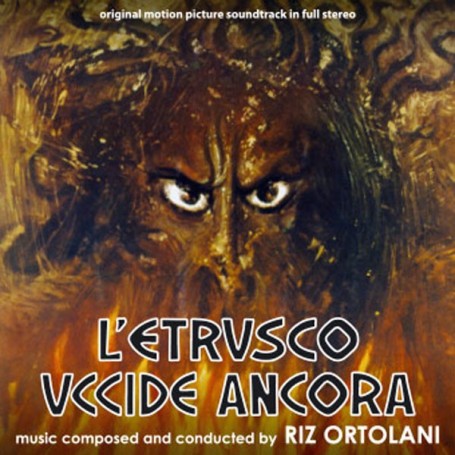 Digitmovies is pleased to publish for the first time, complete and in full stereo, the OST by Riz Ortolani for the movie “The dead are alive”, directed in 1972 by Armando Crispino and starring Alex Cord, Samantha Eggar, John Marley, Nadja Tiller, Enzo Tarascio, Horst Frank, Enzo Cerusico, Carlo De Mejo, Daniela Surina, Vladan Milasinovic, Christiane Von Blank, Mario Maranzana, Wendy D'Olive, Pier Luigi D'Orazio, Ivan Pavicevac. During the “Festival dei Due Mondi” (“Festival of Two Worlds”) in Spoleto, which also involves the elderly conductor Nikos Samarakis (Marley), his wife Myra (Eggar), their son Igor (De Mejo) and the choreographer Stephen (Frank), their friend, the American archaeologist Jason Porter (Cord) discovers, at the necropolis of Tarquinia, a terrifying fresco depicting a human sacrifice of a young couple, painted by the same Tuchulcha, the Etruscan god of death. A short time later two other lovers are brutally murdered in another tomb, where they had hidden to make love. At the crime scene, Commissioner Giuranna (Tarascio) finds a pair of ballet slippers left at the scene, initially suspected of the choreographer, but then the man appears innocent. The curse of the evil Etruscan god strikes again, and this time his victims are Igor and his girlfriend Giselle (D’Olive), the young man, however, survives, but is severely wounded so he cannot participate in the investigation. The Commissioner finds that in the past, the American archaeologist Porter had an affair with Myra Samarakis and at that time, in the grip of alcohol, had tried to kill the woman. Porter is also cleared after a guardian of the Etruscan necropolis is killed. Even the conductor suddenly dies under mysterious circumstances, leaving a confession where he states that he was the author of all the crimes. Porter, not convinced of it, is left to shed light on the truth. For the realization of this project, which was left in a drawer for years, but only now is achieved, thanks to the approval of the author, have been used stereo master tapes first generation of the original recording session in perfect condition. Riz Ortolani wrote one of the most beautiful themes of his long and successful career: an airy theme of love in a pop which is taken over the film (Tr.1, Tr.3, Tr.5, Tr.8, Tr.10, Tr.12, Tr.14, Tr.16, Tr.18) and alternating with dramatic atmosphere of suspense and mystery (Tr.2, Tr.4, Tr.6, Tr.7, Tr.9, Tr.11, Tr.13, Tr.17), which perfectly describe the emotional tension of the story, and music Lounge (Tr.15). A masterpiece of OST that absolutely deserved to be rescued and preserved on CD, in honor of Art Film director Armando Crispino and the musical art of the composer Riz Ortolani.