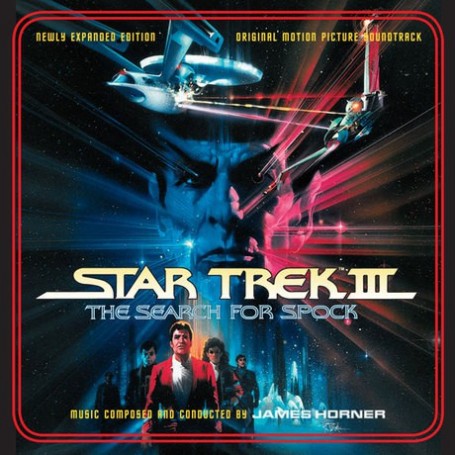 When FSM released the long-awaited expanded edition of James Horner’s Star Trek II: The Wrath of Khan (1982) in 2009, it didn’t take a Vulcan scientist to assume that the score’s companion piece, Star Trek III: The Search for Spock (1984), might also see the light of day. FSM delivers—thanks to the good graces of Paramount Pictures and Capitol Records.

James Horner’s Star Trek III continues his superlative work for the Final Frontier, with emotional developments of the B-theme (the “Enterprise theme”) and Spock’s theme from the earlier film, as well as exotic atmospheres for the all-important Vulcan mysticism that drives the story. The film’s villains, the Klingons, receive a new theme with exciting barbaric instrumentation. From the grand “space opera” setpieces (“Stealing the Enterprise,” “Bird of Prey Decloaks”) to intimate, spiritual moments (“The Mind-Meld,” “Returning to Vulcan”), Horner’s Star Trek III is one of the finest scores in the Star Trek canon.

The Star Trek III soundtrack has been available before but only in a 43-minute LP sequence. FSM’s 2CD set features two programs, both newly mastered from recording engineer Dan Wallin’s first-generation digital film mixes: Disc one features the complete score as intended for the film itself, including such long-desired cues as “Grissom Destroyed,” “A Fighting Chance to Live” (featuring the Enterprise’s self-destruct countdown and immolation in Genesis’s atmosphere) and “Genesis Destroyed.” In addition, previously unreleased film versions of cues such as “Klingons” and “Stealing the Enterprise” make their premiere, with differences that are subtle but noticeable to devoted fans. Disc two features a recreation (in better sound quality) of the familiar LP sequence—complete with Group 87’s pop version of “The Search for Spock.”

*Contains different versions than in film.