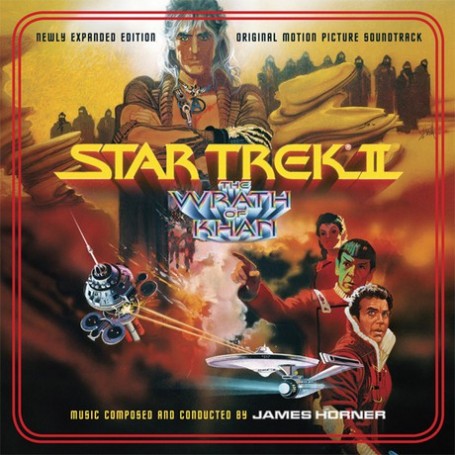 Star Trek II: The Wrath of Khan (1982) is beloved as arguably the finest Star Trek feature film. Directed by Nicholas Meyer (Time After Time), the film features the death of Spock, one of William Shatner's finest performances as Kirk, and an iconic villain in Ricardo Montalban as Khan. After the special effects-laden Star Trek: The Motion Picture, it was Star Trek II that set the franchise back on its feet with a rich, weighty narrative of youth and age, life and death that continues to be the yardstick against which future films are measured—it is the quintessential example of mining the franchise for all the drama it possesses while staying true to its essential themes and characterizations.

The film benefits enormously from a rich, sweeping symphonic score by a composer at the time virtually unknown, but who has since then become one of the giants of the field: James Horner. Then 28—with only a few films under his belt—Horner was personally selected by Meyer and his colleagues when the budget prohibited the hiring of a veteran like Jerry Goldsmith (who had done such a sensational score for the first film).

Working closely with Meyer, Horner crafted flowing, nautical-sounding melodies for Kirk and the Enterprise that recalled the spirit of Captain Horatio Hornblower, one of Gene Roddenberry's inspirations for the series. Horner contrasted sweeping, flowing themes for the heroes against shorter, warlike music for the archvillain Khan—creating dynamic and memorable battle music for the film's WWII submarine-style spaceship confrontations. But it was the film's core story of the friendship between Kirk and Spock—and the separation of that bond at the story's end—that received Horner's most heart-pulling and emotional scoring.

Star Trek II was released on LP by Atlantic Records in a 45-minute program issued on CD by GNP/Crescendo (long out of print). Although the album program featured the score's highlights, fans have long clamored for a complete-score presentation—adding such important cues as the mind-control sequences involving Chekov and Capt. Terrell being possessed by alien eels, the revelation of the Genesis Cave, the final battle between the Enterprise and Reliant, and Spock's death and funeral ("Amazing Grace"). FSM delivers in cooperation with Rhino Entertainment (who administer the Atlantic Records catalog) and Paramount Pictures (owners of the Star Trek film franchise)—remastering the complete score from Dan Wallin's 1982 three-track film mixes, stored in the Paramount vaults in sterling sound quality.

The 28-page CD booklet features commentary and track-by-track breakdowns including new and historical interview quotes by Horner, Meyer and others involved in the production—as well as our customary art direction by Joe Sikoryak featuring stills, rare artwork and behind-the-scenes photos.
To borrow a quote from a completely different movie—American Beauty—here at FSM we feel about this CD like Kevin Spacey when asked about the hotrod in his driveway: "It is the car I've always wanted and now it is mine."