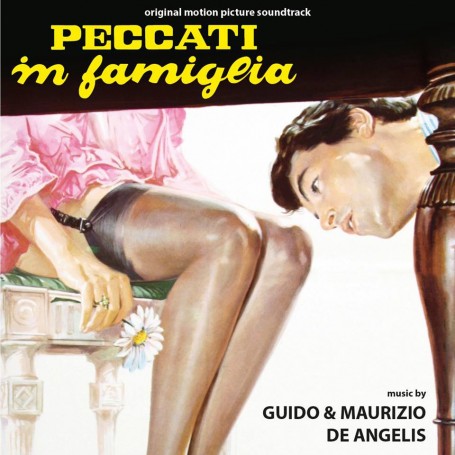 Digitmovies releases, for the absolute first time on CD, the OST by Guido and Maurizio De Angelis for the comedy film “Scandal in the Family” (“Peccati in famiglia”).

For “Scandal in the Family,” in 1975 Beat Records released an EP with 4 tracks: “Country life”, “Milo”, “Rosina” and “Crazy baby.” The last two were sung by Maria Teresa with the Mescaleros.

Our CD contains all the music recorded at the time from the original master tapes.

Plot:
The Industrialist Carlo (Montagnani) and his wife Piera (Mayniel) and daughter Francesca (Tamburi) spend their vacation together in their villa in Piacentino. Upon his arrival, Carlo discovers a new cook has been hired, the young Doris (Stefanelli) who doesn’t wait 1 second before flattering and trying to seduce him. A few days later Milo (Placido) arrives, the son of one of Carlo’s brothers. Milo wins over Francesca and then seduces Doris and even enters in good graces with Piera. Now that Milo is sure the three women are completely devoted to him, he pushes Carlo to excessively exert himself with the cook, causing him to have a heart attack. Milo inherits everything.