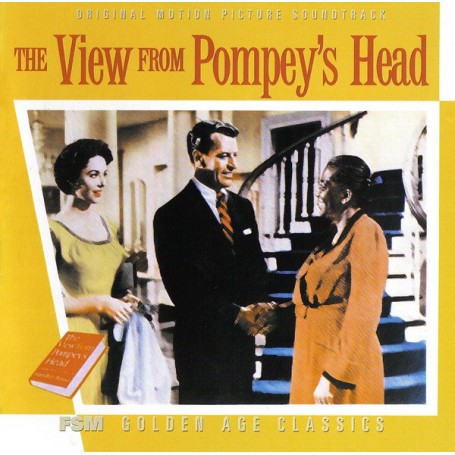 The View from Pompey's Head (1955) has nothing to do with Mount Vesuvius, but is instead a slice of Southern Americana touching upon racism, class prejudice and adultery. Richard Egan plays a lawyer who returns to his hometown to sort out a racially oriented mystery and finds himself reunited with an old flame, played by Dana Wynter. Writer/producer/director Dunne asked Bernard Herrmann to score the film, but Herrmann was involved with Alfred Hitchcock's The Man Who Knew Too Much and suggested young Elmer Bernstein as an alternative.

Only five years into his Hollywood career, Bernstein triumphed with his first romantic score, a rich, melodic and American work with a memorable love theme and haunting passages. The score features the touchstones of Bernstein's best dramatic writing, evoking melancholy and nostalgia as well as joy and warmth. In many ways it was the predecessor to his lush score to From the Terrace (FSMCD Vol. 3, No. 8).

In 1959 Dunne directed Blue Denim, a controversial film starring Brandon de Wilde and Carol Lynley as teenagers facing an unwanted pregnancy. This time Herrmann was available and wrote a "Baby Vertigo" type of score reminiscent of his anguished romantic writing for Hitchcock, with yearning, Wagnerian passages for strings. Perhaps overbearing for the film, it has long been a fascinating curio in Herrmann's career (with several unused cues) and is a powerful score with many elegiac passages written amidst North by Northwest, Twilight Zone's first season and Journey to the Center of the Earth.

Both Pompey's Head and Blue Denim are remixed in stereo from the original multitrack sessions; the CD features liner notes by Herrmann archivist Christopher Husted. One director, two forgotten films, and two legendary composers—that is the basis for this doubleheader of great film music with no shortage of personality.