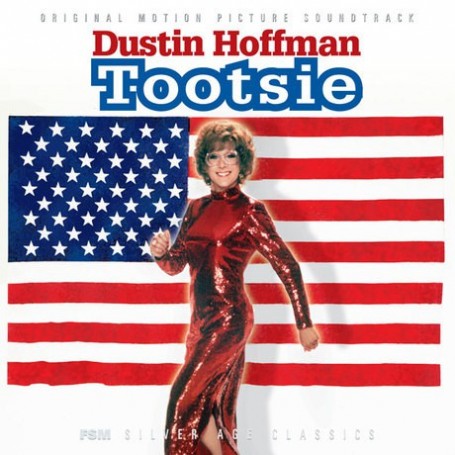 Tootsie (1982) is one of the most famous comedies in Hollywood history, with a love song (“It Might Be You”) that has become a pop standard. Yet the soundtrack has been virtually unavailable on CD—until now.

Tootsie starred Dustin Hoffman as an unemployed actor who dresses in drag to land a role on a soap opera. But when his outspoken feminist creation, “Dorothy Michaels,” becomes a media sensation, he grows desperate to stop leading a double life—and to confess his love for his colleague, played by Jessica Lange. With a masterful blend of drama, comedy, contemporary realism and social commentary, and brilliant supporting performances by Dabney Coleman, Teri Garr, Bill Murray, Charles Durning and director Sydney Pollack (as Hoffman’s apoplectic agent), Tootsie is justifiably a classic.

The pitch-perfect score to Tootsie was by Dave Grusin, Pollack’s longtime collaborator on films such as The Yakuza, Three Days of the Condor, Bobby Deerfield and The Electric Horseman (and later, Havana, The Firm and Random Hearts). Tootsie’s unique combination of laughs with serious subject matter required an original approach, and Grusin elevated the film by using the modern jazz fusion style he had helped create in his career as a recording artist. Upbeat, energetic and contemporary, jazz fusion was the perfect choice for Tootsie, and Grusin himself performed the keyboards.

Tootsie is also a masterful example of songwriting for film. The two songs—the pop-standard “It Might Be You” and Caribbean-flavored “Tootsie”—recur in different guises to advance the story, with sensitive lyrics by Alan and Marilyn Bergman and vocals by Stephen Bishop. With music by Grusin himself, the songs emerge seamlessly from the score’s thematic material and could not be more appropriate or essential.

Tootsie was released on LP at the time of the film on Warner Bros. Records but has been released on CD only in Japan. FSM’s premiere U.S. CD features not only the album program (a combination of the original soundtrack and re-recorded selections), but a bonus section of additional score cues and alternate versions—all in vibrant stereo. Liner notes are by Jeff Bond and Lukas Kendall with new and archival interview quotes from the participants.