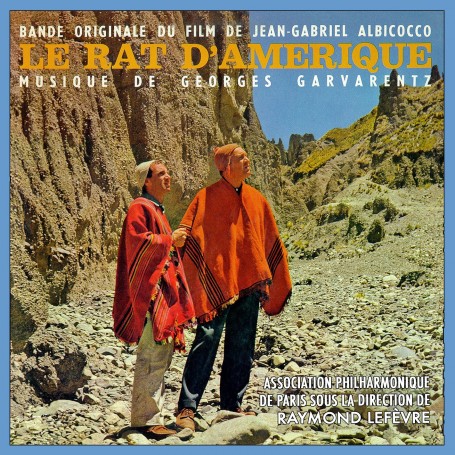 Comfortable in a variety of styles, the French composer Georges Garvarentz (1932 - 1993) seemed ready to accept all assignments that came on his way, from frivolous comedies to serious dramas, through B-movie thrillers. For example, there was his lasting collaboration with director Denys de la Patellière for, notably, Un taxi pour Tobrouk (their biggest success), Caroline chérie, Du rififi à Paname, Le voyage du père, Soleil noir, Le Tonnerre de Dieu. In the mid 1960s, Garvarentz was entrusted with the music of a half-dozen action movies aimed to a wider, international distribution, involving the participation of Americans: Panic Button, Triple Cross, The Southern Star, The Corrupt Ones, They Came to Rob Las Vegas. He followed up with Killer Force in 1976 and Teheran 43 in 1981.

Still, the overall average quality of these movies explain why Garvarentz remains relatively unknown today. Le rat d'Amérique (The Rat Trap) rightly gained a special status in his vast production. This Jean-Gabriel Albicocco's movie, starring his step-brother Charles Aznavour and singer actress Marie Laforêt, tells the misadventures of a Frenchman who leaves his country to try his luck in South America. While the movie itself seems to have completely disappeared, its purely instrumental music has survived and continues to impress thanks to the LP record that was released in 1962, now a valuable collector's item. Here a mammoth, classical sounding symphony orchestra of 90 musicians blends perfectly with the traditional repertoire of Paraguay and Bolivia, giving the music a refreshing vitality. The composer has obviously given the best of himself for this special project, one that must have been close to his heart.

The soundtrack of Le rat d'Amérique was released on a 45 rpm EP and, still an uncommon practice at the time in Europe, on a 33 rpm LP album. Moreover, while only a monophonic version was the most common, the company Barclay pressed a small number of copies in true stereo. Of course, this rare version of Le rat d'Amérique is the only one that pays justice Garvarentz's powerful score. As our research to find a master tape recording proved unsuccessful, we have transferred the music from one of those precious stereo vinyl albums, sparing no effort to digitally restore it.