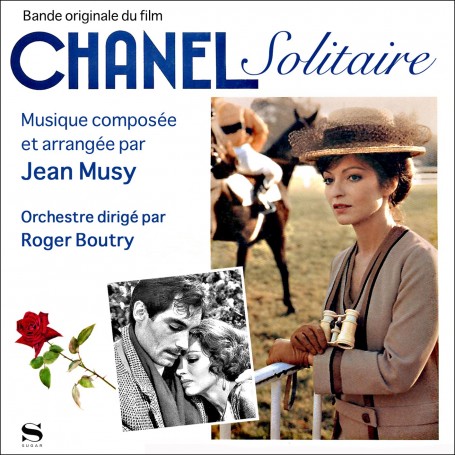 This is the CD premiere for Chanel Solitaire (1981), a gorgeous soundtrack by a composer known primarily as arranger and accompanist for many famous French singers. Jean Musy indeed started working in the 1960s with Joe Dassin, Catherine Lara, Nicolas Peyrac, Barbara, Nicole Croisille, Yves Duteil, Françoise Hardy, Charles Aznavour, to name only a few stars. This self-taught musician has contributed to over a thousand 45 rpms and some 150 LP albums !

Jean Musy still found time to compose no less than 70 film scores for directors such as Costa-Gavras (Clair de femme) and Jean-Claude Brisseau (Noce blanche, L’ange noir, etc). However, it is with Chanel Solitaire, directed by Charles Kaczender in 1981, that he was able to give the full measure of his talent. This drama, starring Marie-France Pisier, Timothy Dalton and Rutger Hauer, traces the career and the love life of the great fashion designer Coco Chanel. Unfortunately, the movie failed at the box office and its soundtrack sunk into undeserved oblivion as well.

Performed by the Orchestre symphonique de la Garde républicaine conducted by Roger Boutry, the music from Chanel Solitaire remains true to the sound of the early 20th century period, relying on a wide variety of deeply sensitive themes. While the original LP soundtrack included only thirty minutes of orchestral music, our release offers an extended version that should meet the expectations of all romantic listeners.

This limited edition of 350 copies, licensed by Gruppo Sugar Group, has an 8-page color booklet.