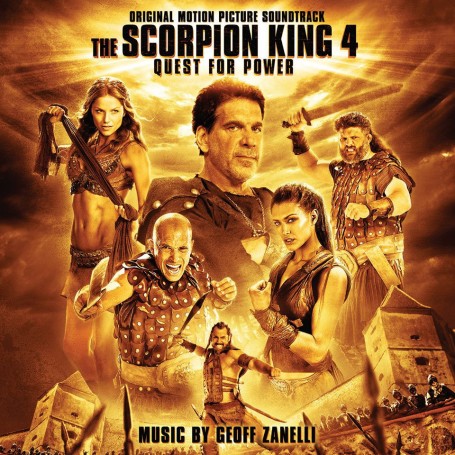 THE SCORPION KING 4: QUEST FOR POWER

La-La Land Records and Backlot Music present the cd soundtrack album for The Scorpion King 4: Quest for Power, Universal Picture’s action/adventure feature starring Victor Webster and Lou Ferrigno. This massive orchestral soundtrack features 20 new score cues by Emmy Award-winning composer Geoff Zanelli (“Into the West” miniseries).
Zanelli has become a standout in the film and television scoring industry, garnering accolades and recognition for his work since going solo after numerous collaborations with Academy Award-winning composer Hans Zimmer.
Zanelli had a fond experience working with director Mike Elliot, saying, “What gives this movie its identity and sets it apart is the way it uses humor to challenge the clichés and gender stereotypes that can keep a fantasy film from feeling fresh, or fun, or original.” With respect to the score, he goes on to say, “I tried to imbue the score with gravitas and play to the epic nature of the story. But whenever I’d start to get pretentious or too self-important, my director [Elliot] would say something like, ‘Geoff, please don’t forget that there are two grown women in tattered clothes having a cage fight in this movie.’ There’s a dragon, too.”
About the film:
Join an exciting new chapter in the action-packed series from the Producers of The Mummy! After the king of Norvania is assassinated, the legendary Scorpion King Mathayus is framed for the crime and must fight off an entire kingdom of soldiers. Now Mathayus (Victor Webster) and his only remaining allies, a mysterious woman and her unconventional father, are the last hope to stop the evil heir to the throne on his quest for an ancient and almighty mystical power. Featuring Lou Ferrigno (The Incredible Hulk) and an all-star cast of fighters, including Roy “Big Country” Nelson (Winner of The Ultimate Fighter), Royce Gracie (UFC Hall of Fame) and Don Wilson (Three-time World Kickboxing Champion).