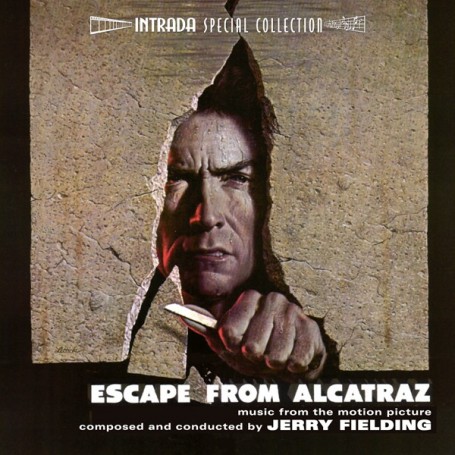 ESCAPE FROM ALCATRAZ / HELL IS FOR HEROES

World premiere of two dramatic soundtracks to Paramount films directed by Don Siegel. Appearing first is brief score by Leonard Rosenman for intense, highly regarded WWII action film HELL IS FOR HEROES starring Steve McQueen, Bobby Darin, Fess Parker. Rosenman launches with one of his most exciting "Main Title" sequences of his career, then settles in for closer look at psychology of men in war. Intrada presents complete score in stereo from original three-channel scoring session masters. Second up is longer, highly complex score by Jerry Fielding for Clint Eastwood prison picture ESCAPE FROM ALCATRAZ. Combination of director Siegel, star Eastwood, composer Fielding guarantees success, this one is no exception. Deliberate movie allows composer to examine confined spaces, cold conditions of containment through use of 'musique concrete' techniques. As Fielding described score in 1979 lecture: "It's all hardware... steel on steel... it's Alcatraz. There's nothing lyrical about it; there's nothing poetic about it. It's an awful place." Quietly intense, slow-buring music was first played by orchestra, then manipulated in variety of manner during later mixing phase to create distinctly unorthodox, experimental music, highly unusual for films. Complete score appears, including alternates. Due to unusual nature of score, where much of it was created mechanically in studio after recording, finished mixes in varying stages of mono, multiple mono and stereo are necessarily the only elements that can be presented. They have been expertly mixed here into two-channel stereo by Chris Malone to afford optimal listening pleasure. Flipper cover allows original Paramount campaign artwork from either film to show as front cover (you choose your favorite!) plus stills, liner notes by John Takis and complete cue assembly details help round out exciting package. Leonard Rosenman, Jerry Fielding conduct. Intrada Special Collection release available while quantities and interest remains!

Escape From Alcatraz
Composed and Conducted by Jerry Fielding