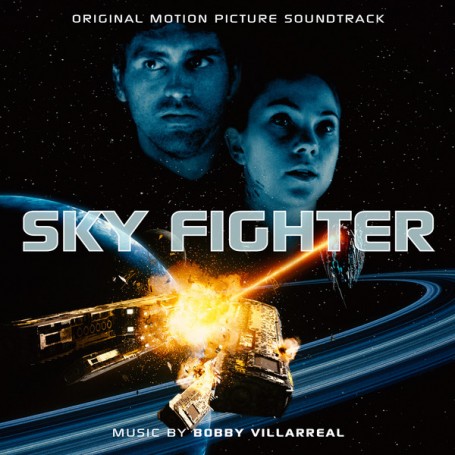 "LIFE KNOCKS YOU DOWN, YOU GET BACK UP"
Film Score Monthly returns with a special 251st album: a unique, two-disc limited edition Blu-ray/soundtrack CD release of Lukas Kendall’s sci-fi short film, SKY FIGHTER.

In the 26th century, humankind fights a war in space against an unstoppable alien adversary. A pilot, John, awakens on the deck of his two-man fighter-bomber spaceship—with no memory how he got there. His copilot, Mo, tells him he was hacked (via his cybernetics) by the aliens, and she tried to save him…yet evidence on the ship points to HER being the one possessed by the enemy. She he trust her…or the little memory he regains?

Sky Fighter was funded (in part by fans on Indiegogo) and filmed in 2018, and released in January 2020 by the DUST channel for sci-fi shorts: https://www.youtube.com/watch?v=I1SQILFvd6Q. It was well received and has accrued over 2M views across different platforms.

This Blu-ray/soundtrack CD combo is the final perk being sent to Sky Fighter’s Indiegogo donors. Extra copies are being made available via Screen Archives Entertainment. The short film is presented on Blu-ray with 5.1 and 2.0 audio mixes, while the CD features the complete 12:25-length score in stereo. The booklet is a three-panel fold-out, with notes from Kendall and Villarreal, and the names of qualifying Indiegogo donors. Package design by renowned Joe Sikoryak.

As a personal note from the filmmaker—thank you, everybody!!!